Rising Star games needed a deadly Kickstarter campaign video. They’ve developed a new board game based on the cult video game Deadly Premonition and they turned to crowdfunding to make into a reality. Now that the campaigns launched we can proudly reveal our involvement.

We started with our discovery workshop to better understand the product and question what Sam Elphick  and Dan Perez the designers at Rising Star Games really wanted from the campaign video.

Here’s what they said about our discovery workshop;

“We entered the session with the Napoleon team for our initial briefing with what we thought was a fairly clear and resolute picture of our goals and aims, our target audience and our messaging for our video project. We were happy to be challenged on all this, and massively impressed with Napoleon’s card-based workshop session.

The end result of a greatly distilled, ‘pure’, vision was without a doubt the most solid of foundations to start to build our video – and a clear indicator that we would be in expert and understanding hands with the Napoleon team.”

Firstly we take the viewer on the journey of the board game so the video starts with an animation to set the scene for the board game and introduce the characters. Next comes our filming of Sam and Dan to communicate their passion behind the original game and encouraging people to pledge. We also filmed some of their friends in a local cafe playing the game.

How it turned into a Deadly Crowdfunding Campaign 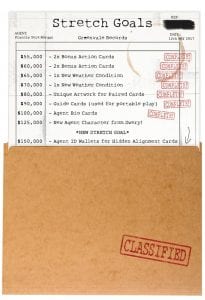 They have a dead-icated following acquired from the video games cult fan base but what’s clever is the way they launched and seeded their campaign to really resonate with their audience.

With some tips from us on video seeding to reach their audience, they smashed their target of $50,000 in just eight hours and 14 minutes.

They had a great Kickstarter page with gifs from the video to make their pledge page come alive. Other features they included are: pledge levels, stretch goals, FAQs, an extended Kickstarter campaign video we made and a short version.

Their social media feeds got their fans excited and pushed them on to their seeders page with all the great content.

At the time of writing this they have over doubled their goal and we would go as far as saying they could be used as a case study into successful crowdfunding campaigns.

Congratulations guys, here’s what they said about us on twitter;

Big thanks to the team @NaCr for their exceptional help making the #DeadlyPremonition The Board Game campaign video! Truly wonderful people

Bringing a company logo to life

Protecting your vehicle
with Cybersecurity