The power of storytelling in Crowd Funding

The power of storytelling in a Seedrs campaign video

Our friends at MisoTasty approached us to make their Seedrs campaign video. Bonnie, founder of Miso Tasty, was raising funds to launch a new product range and grow her business.

Where we helped first was with a Discovery Workshop, where we drilled down to her campaigns’s key messages,

Bonnie spent three years developing her product, which has been on sale since 2014 so she had a lot of stories to tell. Her challenge was to take potential clients on her journey, while also communicating the credibility and potential of her product. After the session, Bonnie had ‘the structure to begin writing the script’.

Of course she had a lot to say about her product so the first draft came in at 6 minutes. We helped her cut the script down to fewer than 3. Which we then ‘kicked into shape.’

The Napoleon Creative ‘team took a huge burden off my shoulders by getting strategically involved in planning the storytelling.’

We only did one day of filming in a professional kitchen, where we filmed product shots and Bonnie in action preparing her new range. We then relocated to the office and filmed her piece to camera, using autocue software to speed up the process. 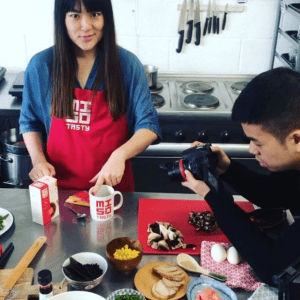 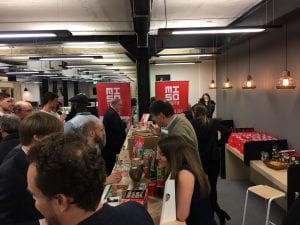 We then moved into post production and begun editing the footage. We combined this filming with footage from Bonnie’s archive. The first cut dragged a little, there was still too much content. So we took a hacksaw to it, and cut it about, and employing the old editing adage “if in doubt, cut it out”. We move bits around and suddenly the film came together.

Bonnie said we turned her ‘massive blah blah blah story to a sharp, neat pitch that had all the important touch points.’

‘They understood exactly what Seedrs were looking for and the team there were really impressed’ Bonnie, Founder, Mi So Tasty

We also made Miso Tasty a short promotional clip to help build awareness before the campaign went live, which they trailed on their Facebook and Instagram accounts.

Bonnie said that she had ‘only had positive feedback about our film.’ She went on to say ‘I think it’s what REALLY swung it for our investors.’

Obviously we’re not that immodest to totally agree with her as she has a great product that she’s passionate about. However, thoughtful, engaging storytelling is a powerful weapon in crowd funding.