How to make a whiteboard animation

Filming a Whiteboard Animation from Napoleon Creative on Vimeo.

We start the process the same way we do with any other animation. We run a Discovery Workshop to clarify your ideas and messaging. We then write a script and support it with a storyboard, so you can see how the video will progress. We then build an animatic, a simple version with static images appear to a dummy voice over, read by one of our team. We deliver several iterations of this, until you’re happy we’ve got the story right

Watch how we make an animation 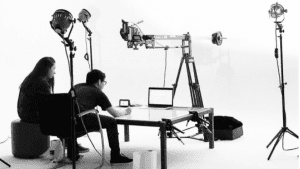 Once you’ve signed it off, we go into the studio. As you can see from the clip above, we need a lot of space to get the lighting right! The trick is to balance getting enough light on the board to make it appear bright and clean, without losing the details of the illustrator’s skin tone and texture.

However, do you want to know the most important thing when filming a whiteboard animation? A really heavy table at the right height! This is so the illustrator can draw comfortably, but so that the board stays still while filming.

We set up a laptop on the table with the animatic, so the illustrator can look at what they need to draw. We look at the image being filmed, and then set out markers to show the edge of the screen. This helps them keep their drawings within the frame. You’ll spot there’s also a monitor, so they can see what’s being filmed.

We film everything in 4k, an ultrahigh video resolution, which means we can zoom in and crop the images if we need to. For example, we might zoom in to a small section in close up to watch a detail being drawn, then zoom out to reveal the master image.

Dos and Don’ts of Whiteboard Animations